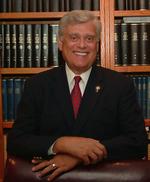 I am pleased to announce that Past District Governor Raymond Plue has agreed to serve as Foundation Chair for District 6080 for 2012-13 and for the following 3-year term.

Those who attended the Zones 30 & 31 Conference in St. Louis know that District 6080 did extremely well in foundation giving during Raymond’s 2010-11 administration, and he has a real affection for the works of the Rotary Foundation.

Those attending the Zone Conference might also forgive Raymond’s alter-ego, a persona that regularly compels him to dress in an all-white suit and unruly wig.

I hope you’ll all join me in welcoming Raymond to this important position, which begins July 1, 2012.