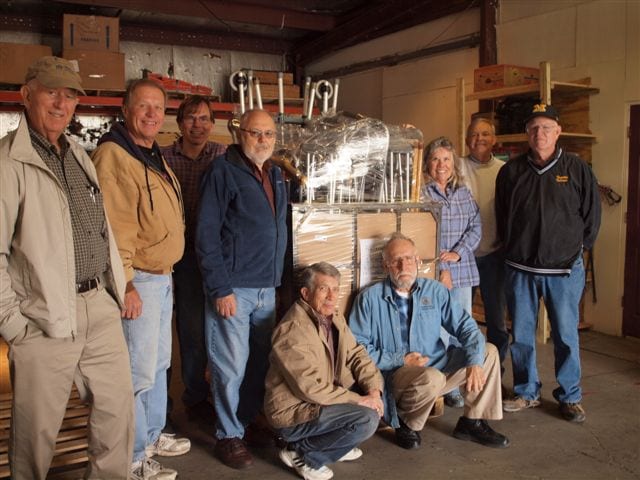 AWESOME! That’s the word describing the Panama humanitarian project undertaken by District 6080 Clubs this year, according to Panama Project committee chair Jim Wieberg of the Jefferson City Breakfast Club. Rotarians throughout District 6080 collected four pallets worth of clothing, sporting and ambulatory equipment and books to help destitute populations in Panama – that’s 150 boxes of goods to make life better for needy families in Central America. On Saturday, November 3rd, Rotarians from the Jefferson City Breakfast and Fayette Rotary clubs sorted, boxed and palleted the items for shipment to Panama. In the spring, the U. S. Navy will transport the pallets to Panama as part of their “Operation Handclasp” initiative. The Panama project committee has also raised $1,500 necessary to transport the items to the appropriate Navy port. “We have had such a great relationship with Rotarians in Rotary District 4240 – which encompasses Panama,” said District Governor Mark Pearce. “It routinely amazes me as to how effective we can be when we’re working together on an outstanding project. THAT – is the power of Rotary,” said Pearce. He also praised Jim Wieberg and the entire Panama Project committee for being proactive throughout the process and providing all the necessary logistics to make such a project possible. “Rotarians – This is another instance in which you have done something outstanding for others in the world. I look forward to seeing what amazing things you’ll be doing in the coming years. YOU are the example,” said Pearce.

Good evening to all… [gall columns=”3″ per_page=”3″ id=””] Today was a great day. We flew to one of the San Blas islands on the Atlantic coast of Panama, about 50 minutes by twin-prop plane. We brought with us one of the PET cars and a few baby well kits, as this was also a the site of another Rotary project in progress. Our first PET beneficiary was named Demetio, he is 63 and had suffered Polio as a young man. He makes his living making straw hats and bowls. His mobility was restricted by an old wheelchair and the pebble/sand street of his home island narrow streets. Words are not enough to describe the joy and happiness of this man ( therefore I’m attaching some photos ) as he transit the streets of Playon Chico island. Dozens of children, women and men came out of their houses to find out what was all the commotion on the street, only to find Demetio going back and forward with his new mobility and freedom. This was simple wonderful. We also delivered a few baby well kits, all of them received with much gratitude, as these items are very scarce and expensive in these inaccessible areas of Panama. We are very happy to have had the opportunity to serve today…..more to come soon. Yours in Rotary, Vicente

Rotarians of District 6080 – I am proud to announce that James Wieberg, from the Jefferson City Breakfast Club, has agreed to serve as Chairman of the District’s Panama Project Committee again this year. Under Jim’s leadership the Panama Project developed significant contacts and relationships with Panama Rotarians and with the Missouri National Guard, which is working on developmental projects within Central America. Many clubs throughout District 6080 raised necessary funds to provide water purification systems, well-baby kits and hand-powered transportation vehicles to poverty-stricken families. I look forward to the reports that Jim and his team will provide us over the coming months on the success of the project to date. I realize that all of District 6080’s clubs are well-tasked with the many local and regional projects they conduct; but it is my expectation that each club will continue to find it a valuable and rewarding experience to be involved with an international project – and this one good way to start that process. Indeed, its multi-club projects like this one that will become the norm as Rotary moves into its “New Visions” administrative structure in 2013. Thank you all for your enthusiasm, as Rotarians, to make the world a better place! Mark Pearce Governor 2012-13 Rotary District 6080 January 7, 2012

Rotarians of District 6080 – I am pleased to announce that I have decided to continue the District’s humanitarian project in Panama during the 2012-13 Rotary year. The Panama Project was launched last year under the encouragement and enthusiasm of Governor Rita Esterly, and it led to wide involvement by individual clubs and to very beneficial results. The fact that our Group Study Exchange is with District 4240 and will be comprised of a Panamanian team serves to reinforce the opportunities for the project in the coming year. I realize that all of District 6080’s clubs are well-tasked with the many local and regional projects they conduct; but it is my expectation that each club will continue to find it a valuable and rewarding experience to be involved with an international project – and this one good way to start that process. Indeed, its multi-club projects like this one that will become the norm as Rotary moves into its “New Visions” administrative structure in 2013. Thank you all for your enthusiasm, as Rotarians, to make the world a better place. Mark Pearce Governor 2012-13 Rotary District 6080 January 7, 2012

The Trustees of the Rotary Foundation have announced Group Study Exchange (GSE) pairings for the 2012-13 Rotary year.  District 6080 will be matched with District 4240, which is a unique district that comprises the four Central American countries of Panama, Costa Rica, Nicaragua and El Salvador.  District Governor-Elect Mark Pearce initiated this GSE connection in hopes of strengthening Rotary ties with our neighbors in Central America.       The tradition of District 4240 is to feature the country of the current District Governor as the host and sending district of the reciprocal exchange.  Next year’s District Governor will be Rodrigo Teran of Panama.  Although the final dates are still to be confirmed, District 6080 expects to host a visiting team from Panama during the fall of 2012 to coincide with the October 18 – 20, 2012 District Conference in Branson.  District 6080 will send a team to Panama in the spring of 2013.   District 6080 is currently organizing a committee to work in support of both the inbound and outbound exchanges with Panama.  If you are interested in serving on the District GSE Committee in 2012-13, please contact incoming committee chairman Brad Bodenhausen at 417-862-5567 or brad@springfieldchamber.com.