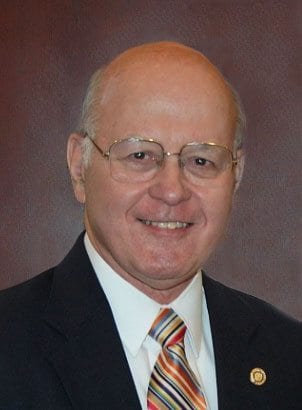 Platt has been a Rotarian for twenty-three years, serving as President of the Rotary Club of Columbia in 2012-13. He has served as a member of the district’s Scholarship Committee since 1993, and as chair of that body for the past nine years. In that capacity, he has overseen the recruitment and selection of outstanding college students to compete for valuable academic scholarships that Rotary International makes possible through the District Designated Funds program. He has also been active in the promotion, selection, and processing of Rotary Peace Scholars.

Last spring, Platt was chosen to lead a Group Study Exchange Team to Rotary District 3132 in west central India during the month of January 2015. The four young professional members of the team include Anne Case-Halferty of Columbia; Stacy Armstrong of Springfield; Kathleen Henschel of Jefferson City; and Bryan Simpson of Springfield. A GSE Team from District 3132 will travel from India to District 6080 in late October and spend a month engaged in a vocational, educational, and cultural tour of central and southern Missouri and attend the District 6080 Fall Conference in Jefferson City on November 1.

Platt was also recently appointed to the Show-Me Rotary Council, the administrative body that plans the annual PETS and SETS multi-district training program for incoming club presidents and secretaries. Within that body, he was assigned chair of the Presidents-Elect Curriculum subcommittee.

During his club presidency, Platt was especially proud to have been a part of a global grant project supported by all the Rotary clubs in Columbia to finance 90 plastic surgeries for deformed and injured people in Jalna, India, providing new hope and opportunity for those who could never afford the restorative procedures for themselves.   Platt has noted that he is “excited and deeply touched by the truly remarkable work that Rotarians around the world are doing for people who find themselves in places where poverty and disease abound, where clean water is not available, where food is scarce, and infant mortality is high.” He also expressed admiration for the high ethical standards that are regularly espoused and practiced by Rotary.

The new District Governor Nominee Designate is a Professor of Music at the University of Missouri. He joined the Mizzou faculty in 1991 as Director of the School of Music and served in that leadership role for seventeen years. Following a year’s leave of absence, he was appointed Chair of the Department of Art at MU. He is currently completing his sixth year in the Art Department in that position. He has taught or served in an administrative capacity for forty-seven years in higher education in Missouri, Oklahoma, Ohio, and the District of Columbia.

Platt was selected as DGN-D by a committee of five Rotarians – two of the most recent District Governors and three current club presidents, as prescribed by the By-laws of Rotary District 6080.