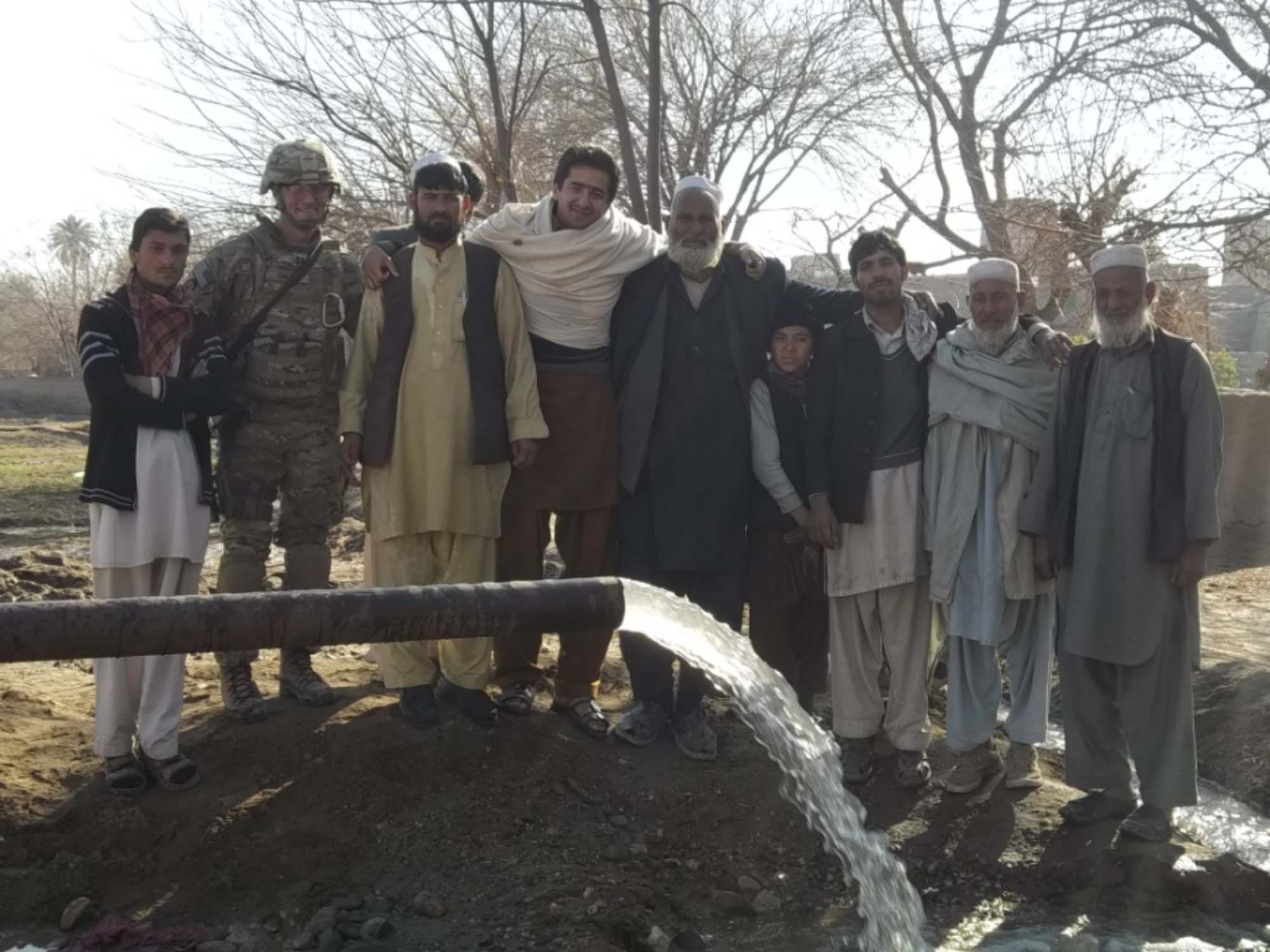 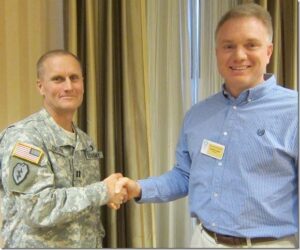 David Lowe is wearing the blue shirt and khaki pants.

Seven thousand miles away, a plaque on a well house states, “Each of us had only a little, but together, more than enough — Inshallah.”

No one knows the significance of those words — and the importance of the water that flows from the well — better than Cpt. Gary Chura, a St. Louis-based attorney, who recently spoke to the Pulaski County Rotary Club (Club #58661 of District 6080) about his service with one of the Missouri National Guard’s Agribusiness Development Teams (ADT) in Afghanistan.

“Six tenant farmers and their families desperately needed more water for irrigation to raise vegetables. They had dreamed of a well on their parched land, and we were able to help them achieve their dream,” Chura says. “To experience bringing together the landowners and tenant farmers with Missourians was a mission I will never forget. These families will be better off forever.”

Cpt. Gary Chura shares in the joy of seeing the water flow in Afghanistan.

ADTs unite American expertise, American concern and Afghan welfare to improve the day-to-day life of the Afghan people who have suffered through decades of war and drought. Since 2007, Missourians have been helping Afghans with agricultural reconstruction and sustainable farming methods.

“The Missouri National Guard has been a leader in promoting and developing agri-business projects as we currently have our sixth Agribusiness Development Team in Afghanistan,” says David Lowe, president of the Rotary Club of Pulaski County, and a local attorney who serves as state judge advocate at Missouri National Guard headquarters in Jefferson City.

Most of the Afghan population is involved in farming or herding.

“The Missouri National Guard recognized that the key to victory in Afghanistan isn’t just through engaging the enemy, but in making our allies economically independent and self-sufficient,” said Army Maj. Gen. Stephen L. Danner, adjutant general of the Missouri National Guard in a March 2012 National Guard article. “Our teams have forged a relationship built on trust and respect with our Afghan partners, and together we’ve transformed the Nangarhar Province. We’ve helping the people there gain a bigger stake in their economic future and laid the foundations for what we hope will one day be a thriving agricultural economy.”

The plaque on the well house states, “Each of us had only a little, but together, more than enough — Inshallah.”

The $7,500 well project, dedicated in February, will provide a sustainable, reliable source of water for the residents of Saidan e’Foulade, a small village in the Nangarhar Province. Project costs were shared between the ADT, local landowners and farmers.

“I did legal work while I was there, but the greatest gift was getting out into the villages and working with the people,” says Chura of his work with the Guard’s 35th Engineer Brigade. “I was very impressed with the savvy and knowledge of the farmers as project managers. They drove a very hard bargain for contractors and supplies.”

Chura’s path to the National Guard began years ago when he served as a Marine. Then, at age 46, he joined Missouri’s guard as an attorney to help fulfill the guard’s need for judge advocates.

“Like so many other soldiers, I feel that I am meant to wear the uniform. I joined the Guard because there were all these wars going on, and I felt I needed to do more. I was actively looking for a way to deploy and was searching for a team to augment, when Col. Lowe selected me for the agri-development project,” Chura says. “I am so glad he did. I am so proud to have participated in this unique mission with my fellow Missourians. We gave a little; they gave a little; and today they have more than enough water to sustain their way of life.”