On April 22-26 it was my honor to serve District 6080 in Chicago at the Council on Legislation that meets every three years. The week long session involved delegates from the 532 Districts world-wide addressing, discussing and deciding on suggested pieces of legislation that had been submitted by clubs and districts. 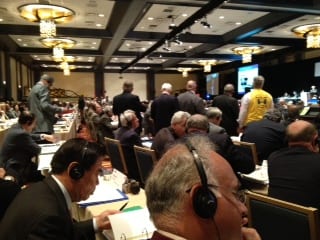 My first day in the chambers I noted that I was seated among delegates from: Norway, Australia, India, Venezuela, Turkey, US, Argentina, and Chile. What a diverse cultural experience.

There are numerous reports available about the sessions and subsequent decisions. If you have specific items that you want information about, I would recommend you go to this RI site.

This listing of results is accompanied by a link to a copy of the submitted items for further information. I have copies of the amendments, etc. and would be happy to review any specific piece individually.

It is not possible to address all the subjects in this report but a few changes to the RI and Club Constitutions and RI By-Laws that will impact Clubs and Districts are:

13-12 The attendance provisions are amended to include service projects, events and activities in lieu of regular meetings.

13-14 Changed the word “shall” to “may” in regards to terminating a member due to non-attendance thus making it a club decision for each situation.

13-28 A Member with excused absences will no longer have their non-attendance included in the club’s attendance reporting.

13-54 Removed the limitation of 2 e-clubs per District.

13-56 Provided for a council of past governors within Districts

13-58 Changed the name of “District Assembly” to “District Training Assembly”.

13-69 Amended the Fifth Avenue of Service to “Youth Service” instead of “New Generations”.

13-86 Revised the duties of District Governor to include “ensuring that the constitution and bylaws of the clubs comply with the constitutional documents” as amended by Council on Legislations.

13-90 Created the title of governor-designate

The Council failed to add “homemaker” as a classification for membership – BUT accepted for membership: “those who have been home with children and/or assisting their partner with work

There was much Debate on having one RI theme year after year.

Those In favor stated:
It would simplify things, help us focus on the Rotary branding

Opposed:
There would be a loss of approx. $500,000 licensing revenue to RI (What about cost to members buying new stuff each year?)

Team building is an element of successful leadership and the President’s theme energizes, inspires and helps motivate the team

We already have “Service Above Self” for external public branding

There was a Variety of Youth Exchange discussions but no major changes.

There was also Debate about Rotary families participating in TRF programs. There was some indication that it is not a US tax issue. (?)

I truly appreciate the opportunity to have participated in this Council and look forward to sharing with any District member more details as requested.