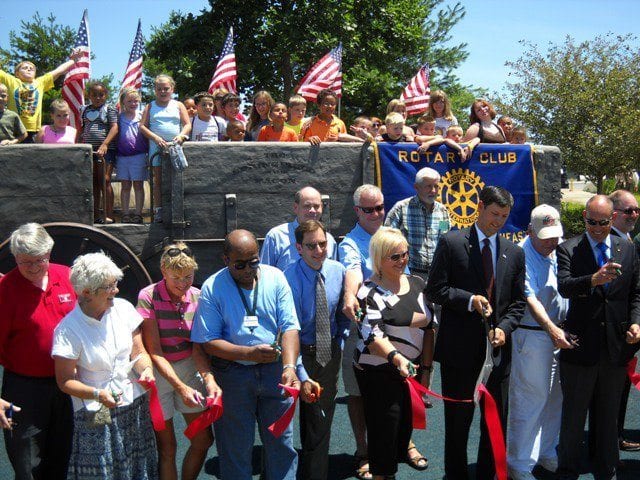 Rotary Club of Springfield Southeast and the Springfield-Greene County Park Board dedicated the new Springfield Wagon interactive play feature Thursday, June 14 at 1:30 p.m. in the K-Park portion of downtown Springfield’s Jordan Valley Park, near the intersection of East Trafficway and Sherman Avenue.

The Springfield Wagon interactive play feature resembles an 1880’s-era open-top wagon, with a wooden bed, wagon wheels, seat, break lever and tongue all molded out of fiber-reinforced concrete. The wagon is ADA-accessible and includes a ramp and a slide, and is surrounded by rubberized safety flooring.

The play feature was inspired by the Springfield Wagon Company, which built thousands of farm, freight, log, circus and other horse-drawn wagons in Springfield from 1872 to 1941. The wagons were painted a signature green and were nicknamed “Old Reliable.” The manufacturing plant was located one block north of what’s now Jordan Valley Park, on land now owned by Harry Cooper Supply Company.

The $50,000 wagon was designed and built by GameTime and was entirely funded by the Rotary Club of Springfield Southeast, which also donated funds for the Kinetic “K-Man” and the Climbing Rock feature, all located in the K-Park kids’ play area of Jordan Valley Park.

Brent Baldwin, President of Rotary Club of Springfield Southeast, said development of K-Park has been a long-term commitment for his club since 2005, when it was identified as a service project to mark Rotary International’s 100th anniversary.

“Our Rotary club has focused on kids and making the community better for children,” said Baldwin. “Jordan Valley Park was a place where we wanted to make a lasting impact.”

“We wanted to do more than just swing sets and jungle gyms in K-Park — we wanted it to have more meaning. The wagon was always a priority, based on the history of the company just down the hill.”

“This group has made a real impact in the park,” said Belote. “The park is much cooler and more kid-friendly because of the K-Man, the Climbing Rock, and now, the Springfield Wagon, which highlights an important part of Springfield’s history. This makes history fun.”