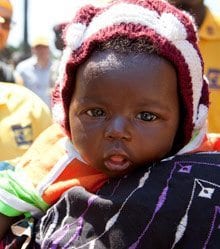 Although this child in Chad has been immunized against polio, others in the central African nation — and those everywhere — remain vulnerable to the disease until it is eradicated worldwide. Photo by Jean-Marc Giboux

Rotary International News, 25 May – Despite the dramatic drop in polio cases in the last year, the threat of continued transmission due to funding and immunization gaps has driven the Global Polio Eradication Initiative (GPEI) to launch the Global Polio Emergency Action Plan 2012-13. The plan aims to boost vaccination coverage in the three remaining polio-endemic countries — Nigeria, Pakistan, and Afghanistan — to levels needed to stop polio transmission. Health ministers meeting at the World Health Assembly in Geneva adopted a resolution on 25 May that declared “the completion of polio eradication to be a programmatic emergency for global public health.”

Polio eradication activities have resulted in several landmark successes since 2010. India, long regarded as the nation facing the greatest challenges to eradication, was removed from the list of polio-endemic countries by the World Health Organization (WHO) in February. Outbreaks in previously polio-free countries were nearly all stopped.

The GPEI’s emergency action plan was developed in coordination with new national emergency plans. The plan builds on India’s success and outlines a range of new strategies and initiatives to better support polio eradication efforts, including:

Full funding of new plan critical – Already, funding shortages have forced the GPEI to cancel or scale back critical immunization activities in 24 high-risk countries, leaving more children vulnerable to the disease and polio-free countries exposed to the risk of reintroduced transmission.Since the start of 2012, the GPEI has moved its operations into emergency mode. The U.S. Centers for Disease Control and Prevention (CDC) has activated its Emergency Operations Center, UNICEF has officially activated an Interdivisional Emergency Coordinating Committee operating directly under the deputy executive director, and WHO has moved its polio operations to its Strategic Health Operations Centre.