Our District’s Club support Director, Don Alberti, has compiled a condensed summary of District 6080’s history and summary accomplishments. Don has been actively involved in event set-up, training, planning, implementing and concluding many of them, so I thought he would be the ideal person to tell the tale of District 6080.

A Historical Review of District 6080

In the Rotary year of 1915-1916 a Rotary District was created in Missouri.
The beginning of Rotary in Missouri as three districts was in 1922-1923. The Rotary year of 1950-1951 completed the formation of four districts. Thru these years, district numbers were changed three times. July 1, 1991, the numbering system was changed once more. This time the numbers were allocated to reflect geographical regions. i.e. 5000-7999, United States, Canada, and Bermuda (USCB).

A ‘Rotary Redistricting Study Committee’ comprised of four Rotarians from each of the four districts was formed to work on the framework to re-district the Show-Me part of the State of Missouri. The committee’s recommendations were presented to those clubs for a vote. After their favorable decision, the relocations plan was sent to Rotary International Board of Directors for their vote.
June 1997, The Rotary International Board of Directors approved the regrouping and consolidation of the four districts in Missouri (6030, 6050, 6070, and 6090) to three (6040, 6060, and 6080) effective July 1, 1999.

Below shows the districts outline before and after the change. 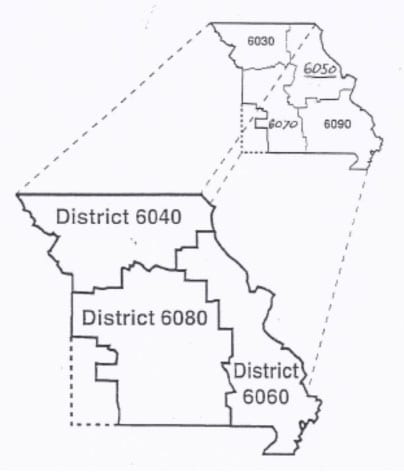 Since 1997, there have been numerous districts requesting RI Board’s approval to regroup.

One of the best years in my wife and my lives was the year that I was 6080 District Governor. It was the first year of our merged district, Rotary year 1999-2000. My wife, Kay, and I attended every Rotary Club in the new merged district and were treated as royalty. Everywhere we went we could feel the Rotary Spirit working for the new district. Every Rotarian said “Yes” to serving District 6080 in whatever position that was asked of them. We made 150% of the District Foundation goal. I was very happy with that effort from the individual Rotarians. The only dark thing was the College of the Ozarks jet plane crashing and killing three Rotarians from the two Rotary Clubs in Branson. The District Conference in Branson was a great success. Everyone did their best and set the bar high for the next Governors. Thank You for allowing me to serve as your first District 6080 Rotary Governor.

The Rotary Youth Exchange (RYE) program has become one of the most respected exchange programs in the world. The number of Inbound and Outbound students participating has increased leaps and bounds since the creation of the district.
This year there are 15 outbound students and 16 inbound students involved in the program.

RYLA (Rotary Youth Leadership Awards) in Missouri is known around the world for their approach. It is Rotary’s leadership training program for youth in all 3 districts and is held annually in Fulton. Average annual attendance from district 6080 is 35.

Springfield Rotaract is the oldest. It was established in 1995 by Rotary Club of Springfield Southeast.

Since the formation of the district, there have been