FULTON, MO—The Rotary Club of Fulton put the finishing touches on its yearlong service project for the Coalition Against Rape and Domestic Violence (CARDV) this week, mulching around the new playset purchased by the club and staining a new gate.

The Rotary club contributed $3,600 raised during the 2015 Callaway Cup Mouse Races toward helping CARDV and these funds were matched by Rotary District 6080, resulting in a $7,200 contribution toward purchases for the domestic violence organization.

The donation allowed Rotary to furnish two “advocacy” rooms, where victims of domestic violence meet with an advocate, identify needs, develop individualized actions to meet those needs, and create a safety plan; completed improvements to the backyard playground (purchased new equipment), patio, and fencing, creating a safer place for children to play outside while their parents are meeting with an advocate, counselor, and/or in a support group environment.

Rotary had partners who helped with the project. The men’s basketball team from William Woods University and the youth group from Heartland Nazarene Church helped stain and repair the fence, stain the side porch, install the locking gate, and haul the old play equipment and other miscellaneous items to the curb for trash pick-up. The new Rotaract club at William Woods stained the new gate. 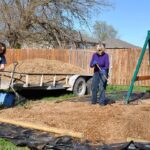 Tim Borman shovels mulch into a wheelbarrow for Bob Hansen to distribute around the playset.