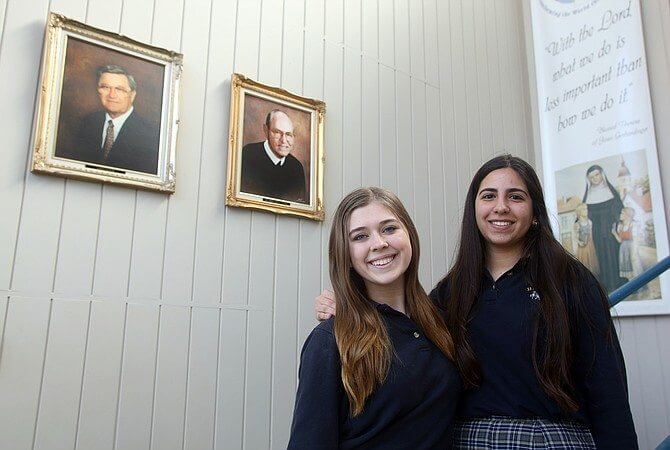 Lauren Micke, 16, left, and Nadine Brahim, 17, pose Thursday at Helias Catholic High School. Micke will be traveling to Spain to study abroad, and Brahim is from Cucuta, Colombia, but has been studying at Helias since August.

A ramshackle of pins and ornaments dangle loudly from Maria “Duda” Penna’s blazer.

Among the decorations are a plastic Coke bottle with her name on it, her plane ticket from Brazil to Missouri, a Mizzou flag, a white Valentine’s Day bear and the Show-Me State’s license plate fastened to the back.

The original plain blue blazer — something every Rotary exchange student receives — has been transformed into a memento Penna said she’ll keep for the rest of her life to remember her time studying abroad.

The Jefferson City Rotary Club has been hosting exchange students for about 20 years. Students between ages 15-18 are eligible to participate. Previous Mid-Missouri students have studied in 18 countries and typically live there for 10-11 months with host families.

Penna arrived in the states in August and is taking classes at Jefferson City High School as a senior. She said she came with few expectations as to what her experience as a Missouri student would be like.

“In Brazil, everyone thinks it’s like ‘High School Musical’ or ‘Glee’,” Penna said with a laugh. “You have American football guys (and other cliques). I knew it wouldn’t be like that but thought it would be kind of like that.”

Nadine Brahim, 18, of Colombia, also expected the distinct genre of friend groups as shown in the movies. Brahim is attending Helias Catholic High School and is in her first semester of college at Pontifical Xaverian University in Bogotá, Colombia. The Rotary program she’s in only allows her to attend high school, which is why she’s studying at Helias.

Brahim plans to study medicine and hopes to return to the states for her residency.

“I really like it here,” she said. “I like the food. I think the people here are really kind and I like the city. There’s a lot of forest and nature.”

As far as education, Brahim and Penna like being able to choose their own classes. In their home countries, schedules are laid out for students year by year, and they don’t have the option to pick what they study.

Even though the women live roughly 5,000 miles apart in South America, they both said there were several similar differences in education compared to the U.S. and their schools back home.

One of the most obvious contrasts is the importance of sports. Both women said academics are the most important, and most of the schools where they’re from don’t have competitive sports teams.

Brahim and Penna also said they felt more academically challenged in their schools back home, but part of that could be the Rotary program suggests they take easier classes to help them adjust locally.

Education is of the utmost importance where they’re from. It’s expected that students study hard in high school and go to college.

Brahim said she loves her time here and if she had to pick between going to school in Colombia or in the U.S., she would choose to be here.

“Yeah, it’s hard, but I think it’s a great opportunity getting out of your comfort zone and to know people from other countries, and the fact that you know another language and you can talk to so many people,” she said. “I think the Rotary program is the best (exchange) program. They make sure you’re in good hands.”

Brahim currently lives with Maria and Mark Micke and their daughter Lauren Micke, who will study abroad in Spain this August.

“Food was probably the first thing I looked up,” Micke said. “I love seafood, and they have a lot of seafood dishes I’m excited to try. … I’m also big into music and theater so I looked to see what they have like that.”

She said she’s excited to pick up a new language and, since Jefferson City is such a small place, she wants to broaden her horizons.

“I think it opens new doors, and you’re more impressive,” she said.

Alex Weaver, a senior at Jefferson City High School, spent his junior year in the Trang province of Thailand.

“I really enjoyed my school because they were supportive and wanted me to do well,” he said.

Every morning, he would walk to school in the groggy heat and had morning assembly with thousands of other students in the school’s basketball courts before going to class.

Weaver took some personal language classes to improve his Thai, but he took his other classes with the rest of the students.

“The first three months are the defining moments because you’re not homesick and you’re confident,” he said. “If you have a good work ethic and practice the language, then you’ll have a fantastic time.”

Studying in Trang also exposed him to what it feels like as a minority. In a sea of roughly 3,000 students, Weaver said he stuck out with his chestnut brown hair and height that toppled nearly every student.

He said, just as in Brazil and Colombia, education is a top priority in Thailand, and the students work hard to get into a good university.

“If you get into a good university — especially Bangkok University — it’s a big deal, and it brings your family respect.”

Respect was also a key cultural difference, he said. Children at a young age are taught to respect their elders, and all students, even the ones who don’t care about school, are very respectful of their teachers.

Tied to that is the importance of family, the highest priority in the Thai culture.

“Most people would drop anything for family,” he said. “My host grandma was always making me food, and they considered me their son. They made me feel like they cared about me.”

Studying abroad inspired him to look into international studies, and he has goals to join the Peace Corps.

“It really showed me how much is in the world to see and do,” he said. “There’s more than Jefferson City. Even if I have a bad day, I can look forward to the future.”

will answer questions and scholarship opportunities will be discussed.