Jennifer E. Jones, a member of the Rotary Club of Windsor-Roseland, Ontario, Canada, has been nominated to become Rotary International’s president for 2022-23, a groundbreaking selection that will make her the first woman to hold that office in the organization’s 115-year history. 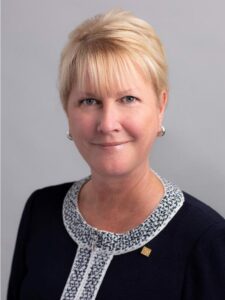 Jennifer E. Jones, of the Rotary Club of Windsor-Roseland, Ontario, Canada, is the selection of the Nominating Committee for President of Rotary International for 2022-23.

Jones will officially become president-nominee on 1 October if no other candidates challenge her.

“As we reflect upon our new strategic priorities, we could have never envisioned that our ability to adapt would become our North Star during what is inarguably the most profound time in recent history,” Jones said in her vision statement. “Silver linings rise out of the most challenging circumstances. Using metric-driven goals, I will harness this historic landscape to innovate, educate, and communicate opportunities that reflect today’s reality.”

As the first woman to be nominated to be president, Jones understands how important it is to follow through on Rotary’s Diversity, Equity, and Inclusion (DEI) Statement. “I believe that diversity, equity, and inclusion … begins at the top and for us to realize growth in female membership and members under the age of forty — these demographics need to see their own reflection in leadership,” Jones said. “I will champion double-digit growth in both categories while never losing sight of our entire family.”

Jones is founder and president of Media Street Productions Inc., an award-winning media company in Windsor. She was chair of the board of governors of the University of Windsor and chair of the Windsor-Essex Regional Chamber of Commerce. She has been recognized for her service with the YMCA Peace Medallion, the Queen’s Diamond Jubilee Medal, and Wayne State University’s Peacemaker of the Year Award, a first for a Canadian. Jones holds a Doctor of Laws (LL.D.).

A current Rotary Foundation trustee, Jones has been a Rotary member since 1997 and has served Rotary as RI vice president, director, training leader, committee chair, moderator, and district governor. She played a lead role in Rotary’s rebranding effort by serving as chair of the Strengthening Rotary’s Advisory Group. She is the co-chair of the End Polio Now Countdown to History Campaign Committee, which aims to raise $150 million for polio eradication efforts.

Jones recently led the successful #RotaryResponds telethon, which raised critical funds for COVID-19 relief and was viewed by more than 65,000. Jones has also received Rotary International’s Service Above Self Award and The Rotary Foundation Citation for Meritorious Service. She and her husband, Nick Krayacich, are members of The Rotary Foundation’s Arch Klumph Society, Paul Harris Society, and the Bequest Society.