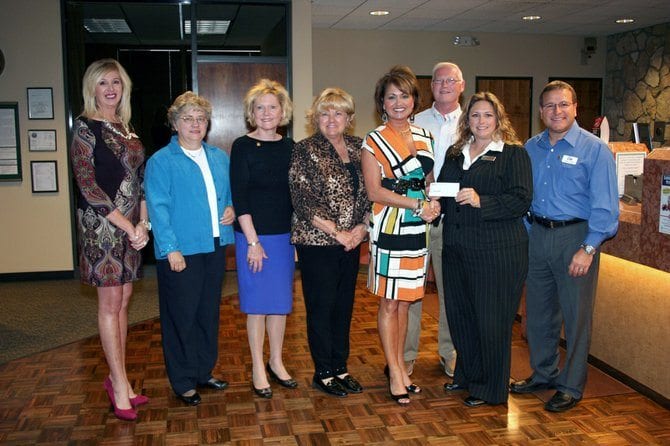 By Dianne Steingrubey at The Lake Today Although the Lake Ozark Daybreak Rotary helps nearly 40 local organizations plus international projects across the world, the Buddy Pack Program is one of their signature efforts as their focus is to improve the lives of children.

On Oct. 17, Lake Ozark Daybreak Rotary presented a donation of $400 to both Camdenton R-III School District and School of the Osage School District to assist with the funding of the Buddy Pack Program.

The money came from a Wal-Mart Foundation grant that was written by Rotary club members Anna Diebold and Davinroy. The Camdenton and Osage Beach Wal-Mart Superstores supported the request to the Foundation in Bentonville, Ark.

Since 2006, the club has contributed thousands of dollars to the Buddy Pack program. Furthermore, Daybreak Rotary made the first donation to The Food Bank from the Lake region so Lake Area schools could be included in the program, according to Rotarian John Caran.

“In the fall of 2006, I was approached by a board member from the ‘Central Missouri Food Bank’, now known as The Food Bank,” Caran said. At that time they were looking for drop-off points where local Lake residents could drop off non-perishable food items to be included in their ‘Buddy Back Pack’ program.”

The board member informed Caran earlier on that year a situation at one of the elementary schools prompted the creation of The Food Bank’s initial efforts at the Lake.

The little girl responded, “I don’t want to go home. We don’t have any food at home and if I have to go home for a long weekend, I’ll be hungry. I want to stay here at school. If I stay here, you’ll feed me.”

“When I heard that story, it broke my heart,” Caran said. “I decided to mention it in our next Daybreak Rotary club meeting. I was brand new to the club and had no pull, or leverage to ask the club for any help. I was hoping for a few donations from club members.”

Curan said after he told the story, Doctor Ron Massie (former Daybreak Rotary president) called out to then president Eldon Becker and made a motion that the club cut a check for $500 from its charity fund. President Becker turned to John Berry (treasurer) and asked for the check to be cut, right then.

“I was totally taken back,” Caran remembered. “Those three men took the lead and immediately began funding The Food Bank’s efforts around the Lake of the Ozarks…thanks to Lake Ozark Daybreak Rotary. Those were the first dollars from the Lake region that went to The Food Bank.”

“I called my business partner who sat on the board at The Food Bank, told him what just happened and he was elated, but not surprised. He is a member of one of the Rotary clubs in Columbia and knew of the Rotary spirit of helping our neighbors in need. At that point, I knew that Lake Ozark Daybreak Rotary was the service club for me to wrap my arms around,” Caran said.

Continued efforts like the Daybreak Rotary help fully fund the program since its loss of financial support from The Food Bank earlier this year. For more information about donating to the Buddy Pack Program at Camdenton Schools, call the Camdenton School District Office of Volunteer Services at 573-346-9243. For School of the Osage’s Buddy Pack Program, contact Assistant Superintendent’s Office at 573-365-4091, ext. 5034.

For information in joining or learning more about the Lake Ozark Daybreak Rotary, contact Russ Mitchell, president, at 573-552-8334.

Lake Ozark Daybreak Rotary club meets at First Family Church each Friday morning across from the School of the Osage High School track. A breakfast buffet is available at 7 a.m. and is catered by Hy-Vee. The meeting starts at 7:30 a.m. and ends promptly at 8:30 a.m.