Columbia, MO – Thirty-six Rotary clubs in District 6080 of Missouri recently battled each other in a month-long effort to fight hunger. Clubs in the northern part of the district competed against those in the south to see which region could do the most to reduce hunger and malnutrition.

“The northern part of the district won the ‘food fight,’ but the clear winners were the people we helped; the people who won’t have to go to bed hungry due to our efforts,” District Governor Steve Dulle of Columbia said.

The highest food total was turned in by the Jefferson City Breakfast Rotary Club, which collected 2,515 pounds of non-perishable items outside a supermarket during Saturdays in July. The club also donated $996 and volunteered 56 hours.

“Instead of a traditional, formal installation for the district governor, we encouraged clubs to join in a work day June 28 at the Food Bank of Central and Northeast Missouri,” Joe Weston, chair of the organizing committee, said. “Approximately 150 Rotarians and guests repackaged nearly 5,000 pounds of Rice Krispies for local food pantries.”

All clubs in District 6080 were then challenged to do something to combat hunger during the month of July.

“Missouri ranks second from the bottom of all states for food insecurity,” Carla McDaniel, District 6080 community service chair, said.  “That’s why we chose this as our first community service project of the new Rotary year.”

She added, “Rotary has six areas of focus, including ‘saving mothers and children.’ At least 7 million children under the age of 5 die each year due to malnutrition, poor health care and inadequate sanitation. We want to do our part to prevent this from happening.”

Rotary clubs in the northern part of the district participating in the “food fight” were:

Rotary clubs in the southern part of the district participating in the “food fight” were: 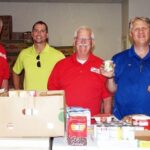 Officers of the Rotary Club of Clinton load up 1,643 pounds of food the club collected for their local food bank. Left to right are Kyle Adkins, president; Jesse Alldredge, vice president; and Parker Mills, secretary.

Rotary presidents Todd White of Columbia Sunrise Southwest and Charlie Anderson of Fulton help out at the food bank.

Columbia Metro Rotary members, (front to back) Sarah Read, Jan Becket and Sherry Major, help out at the Food Bank of Central and Northeast Missouri. The club had 27 volunteer hours

Marilyn and Gary Upton of Columbia Northwest volunteer at the food bank.

Columbia Rotaract members Josh Beck, Jolyn Sattizahn and Kate Gruenewald present a “check” for $200 to the Food Bank of Central and Northeast Missouri. They also collected 18 pounds of food and volunteered 28 hours.

Fulton Rotary President Charlie Anderson sits behind his desk covered with some of the 100 pounds of food donated by the club to the SERVE food pantry. The club also collected $2,170.

The Rotary Club of Mountain View participates in the Zumbathon food/cash collection.

Members of the West Plains Sunrise Rotary Club display some of the 407 pounds of food they collected.