One of the Rotary Club of Jefferson City’s signature service projects to area youth is its annual Student Government Day. High school students from Jefferson City and across the 6080 District are nominated by their teachers or local Rotarians to attend a half-day program that provides the students with a unique and more personal view of State government in Jefferson City.  This year’s participants in the April 16th event included about 130 students from Jefferson City, Columbia, Rolla, Fulton, Salem, Pulaski County, Laurie, Fayette, Buffalo, and Bolivar.

The event closed with a luncheon at the Capital Plaza Hotel featuring high ranking officials from each branch of state government and fellowship for the students with other Rotarians with significant governmental service.  The head table included Mary Russell, Supreme Court Judge; Joe Dandurand, Deputy Attorney General and former circuit court judge; Roger Stottlemyre, Executive Director of the Missouri Gaming Commission and former Superintendent of the Missouri Highway Patrol; and James Klahr, Legislative Liaison for the Missouri Department of Public Safety, all of whom are members of the Rotary Club of Jefferson City.

The luncheon opened with color guard procession by the Color Guard for the Veterans of Foreign Wars Post 1003, followed by the Star Spangled Banner by pianist Jim Bryant and singing of America led by Tom Carr, members of the Rotary Club of Jefferson City.  Rotary 6080 District Governor Mark Pearce and New Generations Chair Rita Esterly were honored guests seated at the head table.  District Photographer Linda Nichols took photos at the luncheon.

Keynote speaker Secretary Kander encouraged students to have real courage to do the right thing, not the easy thing, and to help make their communities better places.

Students were given the opportunity to submit questions to President Heidi Vollet to direct to the head table guests. Student questions included asking the panel how more young people could be encouraged to go to the polls and what were the hardest cases the judges had decided and why. Missouri Supreme Court Judge Mary Russell also explained how one becomes a judge in Missouri.  Deputy Attorney General Joe Dandurand described the duties of the Attorney General’s Office. Director Roger Stottlemyre outlined training requirements for state troopers, and Monsignor Robert Kurwicki explained the role of the House chaplain.

Co-chairs for this year’s event were Immediate Past President Arv Petersons and James Klahr.  Many thanks to them and to all the many Rotarians and volunteers who made the event such a success! 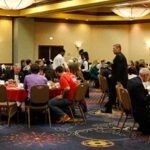 Students having luncheon fellowship with Rotarians

Secretary of State Kander speaking to students about the importance of having courage to do what is right.