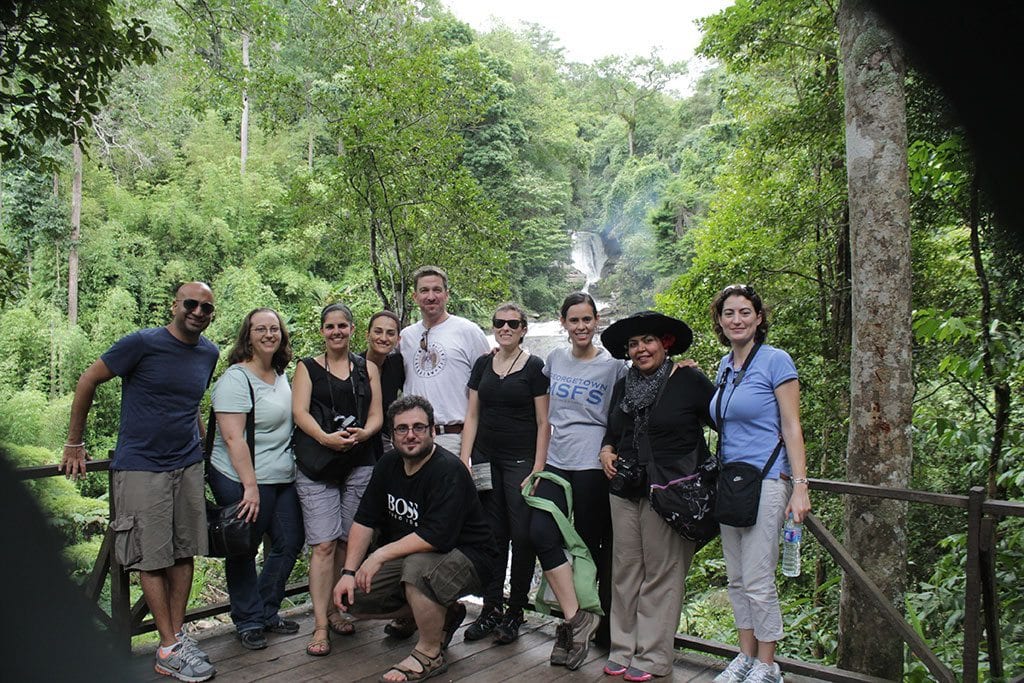 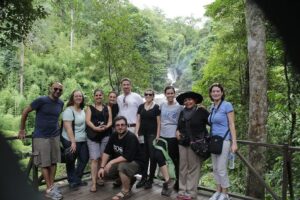 The Rotary Peace Fellows at the National Park of Chang Mai Thailand.

On week five the Rotary Peace Fellows of Chulalongkorn University went for a field trip to work on the topic of human trafficking. The entire week consisted visiting organizations and people working to prevent the practice of human trafficking in Thailand and internationally. I took my sweet time writing this blog because I had to digest all I have seen, in my ten day trip up in the north of Thailand. Then came a day trip to Pataya, organized by one of our Rotary host councilors, and things sort of fell into perspective. You see, it is one thing to talk to people trying to prevent human trafficking; it is another to see it in the beaches of Pataya! But let me take these fifteen days and unpack them for you.

First, let me say that I assume no one reading this blog will be surprised that Thailand is heaven for sex tourism. The sex industry here props the entire country up and its tentacles cover the entire SE Asian region. People migrate legally and illegally from other countries to Thailand to work and so Bangkok and some resort towns like Pataya have become centers for sex tourism. They even sell, T-shirts that say Sex Tourist on them around Bangkok for five dollars. Yet, not everyone trafficked ends up in the sex-industry, some people are just sold for domestic housework, while others, including adult me, are sold to work in the fishing industry as slaves.

Second, there many people who consider trafficking a scourge for the people of the region, a moral and ethical blemish on the face of humanity and are working diligently to end the practice. Rotary here in Thailand and many Rotarians personally have worked and helped financially organizations that are working with people who might be or have fallen victims to the practice. I have to say, I am now a proud owner of many pieces of jewelry and crafts that are produced by these organizations and have resolved to try and engage more actively in the future to end the practice.

The impact this trip had on me is great and started immediately upon arrival in Chang Rai a town in the golden triangle, famous for being the world’s center for Opium production. Since the Thai government has banned the cultivation sale and transport of opium it has been very hard on the people of the hills in Thailand to make a living, even with the government assistance program on substitute crops. Thus many young people from the hill tribes have migrated to the cities for day work and have become more vulnerable to trafficking.
The traditional model of trafficking works as follows: a person in the community, which is respected, tells the parents that he can arrange for work in Bangkok or elsewhere. Families under financial burden agree to send their kids for work by giving them to people they know. The children are transported to the city and are handed over to a crime boss who is then able to coerce them into prostitution or slavery. The entire cycle around the child who is being transported has been titled “the bloodsucker cycle,” because it involves many people from the parents, to taxi drivers, to doctors, to the bar owners, all of whom stand to benefit from the misfortune of the child. This much was made clear upon arrival at the Education Development Center for Daughters and Children in the Community (DEPDC). The center was founded by the man responsible for the name “bloodsucker cycle,” Dr. Sompop Jantraka, and is responsible for educating the community as well as children on the dangers of trafficking.

Many other institutions followed in the next days of our visit at both Chang Rain and Chang Mai. Many other stories were heard but I think what stunned me the most is the transformation of the traditional model into what is a hybrid new model of trafficking. The sex industry has permeated Thai society to such an extend that poorer families and most especially vulnerable segments of the population, such as, stateless people and refugees, that in some circles it is considered an acceptable form of employment, or even a desirable one. Some families will sell their own children to traffickers, with the expressed understanding that the money will flow in to them. And it does! In some of the poorest areas in Thailand you see people with upscale housing and brand new imported cars. Most of these goods are the result of a female, and increasingly these days, a male relative living and working in Bangkok or abroad. Many of these relatives are working in the sex industry.

As an academic and a researcher I expected and knew about the bloodsucker cycle and how trafficking networks operate. This change in the victimhood from dire need and desperation to consumerism and the gaining of societal status through prostitution simply blew my mind! This society has now moved from needs pushing it to the extremes, to wants, doing the same. Some people theoretically join the sex industry in order to have disposable income it has become an honorable profession. The causes of the problem, of course, are very complex and vary from cultural, prostitution is a practice that goes back centuries in this region, to structural, the state is failing it’s citizens needs. I will not bore the reader by expanding on the causes and analyzing this issue further but I would like to say that the Peace fellows of Chulalongkorn University, class 15, have spent an enormous amount of time discussing, analyzing and proposing strategies to alleviate the problem of human trafficking in south East Asia. I know some of my colleagues and I will be working on this issue in the future and that is precisely why I am here in Bangkok representing Rotary region 6080.