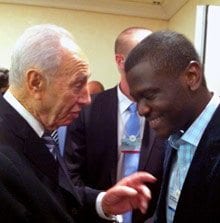 By Gregory Rockson, Rotary Foundation Ambassadorial Scholar from District 6080, studying at the University of Copenhagen, Denmark

Receiving a Rotary Foundation Ambassadorial Scholarship is one of the best things that has ever happened to me.

Just two months after I arrived in Denmark, I founded the Copenhagen Union, the first English-speaking debate society in Denmark. I was also able to arrange for top Israeli and Palestinian diplomats to speak with University of Copenhagen students at the same time in the same room.

Due to the attention the meeting created, I decided to do even more to encourage dialogue between youth in the region. During two weeks in the Middle East, I visited communities in Israel and the Palestinian territories, and helped form the Six Days of Peace, an Israeli-Arab initiative aimed at building a strong foundation of dialogue and cooperation between young Israelis and Arabs. The group held a benefit concert 5-10 June, featuring ten musicians from different cultural background who joined a classical violinist in performing music in support of peace in the Middle East.

My work in the Middle East also captured the attention of the World Economic Forum, and I was invited to attend this year’s annual meeting in Davos, Switzerland. I had the privilege of speaking on a couple of panels on the role of my generation in shaping the world. While there, I met with several world leaders including Israeli President Shimon Peres, Jordan Prime Minister Awn Shawkat Al-Khasawneh, and Bekele Geleta, secretary general of the International Federation of the Red Cross and Red Crescent Societies.

In just nine months, I have grown in so many ways beyond what my traditional college experience could ever give me. I have my Rotary scholarship to thank.

Watch a news feature about Rockson (in Danish) or read an article in the Huffington Post. Your contributions to The Rotary Foundation support Rotary scholars like Rockson.Contribute today.