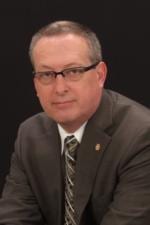 Governor Joe Beltz is proud to announce that the special committee, formed to fill the vacancy in the District Governor Nominee position, has selected Springfield Metro Rotarian David Bixler, which will lead to his serving as Governor of the district in 2016-17. His term as DGN will begin immediately.

Bixler has been a Rotarian for 12 years, first as a member of the Springfield Southeast club and then as an organizer and charter member of the Springfield Metro club where he served as president in 2010-11 and also as the Communications Officer of District 6080 in which he coordinated the establishment of DACdb as the district’s informational database. He was named Rotarian of the year by the district in 2011. Bixler is a major donor to the Rotary Foundation, a multiple Paul Harris Fellow and a member of the Paul Harris Society.

Professionally, David serves as president of Bixler Corporation, a cleaning and restoration company with more than fifty employees in southwest Missouri. Over the past five years he has made six trips to Tlaquepaque Mexico for Rotary service projects, and he has encouraged a number of Tlaquepaque residents to come to Springfield to assist with Springfield Rotary’s Rock ‘N Ribs celebration and fundraiser. David’s wife, Julie Bixler, is also a member of the Springfield Metro Rotary Club and is also a Paul Harris Fellow.

Governor Beltz was very pleased that several well qualified Rotarians had applied for the DGN vacancy position on short notice, which he hopes bodes well for the selection of the District Governor Nominee Designate search which will determine the Governor for the 2017-18 year. That process is still underway and more information on that is available on the district’s web site.