The competition will match the North and South regions of Rotary District 6080 as divided by the Dulle (District Governor-Elect)-Beltz (Current District Governor) Line, seen on the map on the next page. The goal is for each region to accumulate as many points as possible by doing volunteer work or donating money or food to regional food banks and pantries or other charitable organizations which provide food for the needy and hungry. The Competition will run from June 27th through July 31st. The winning region will be recognized in District publications and meetings and an appropriate traveling trophy will be awarded at the District Conference. 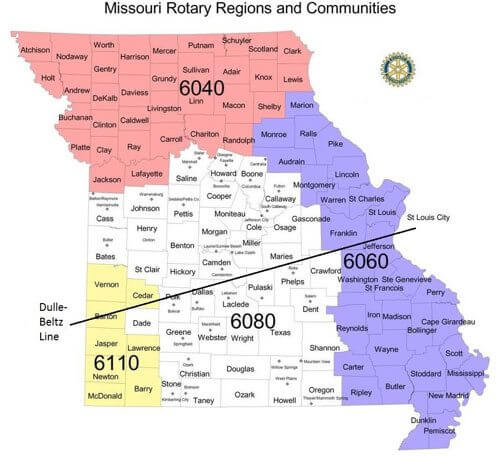 The contest begins on June 27 and ends on July 31.

Points are allotted to clubs through Rotarians, Rotaracters, Interacters, their families and friends as follows:

Club president-elects will be responsible for collecting their club’s total points and, of course, will follow the Four Way Test in their reporting. These are to be submitted to the District Community Service Chair, Carla McDaniel (crmcdaniel1969@yahoo.com) by August 10. The winner will be announced as soon as possible after that. Clubs with the highest per capita points and individuals with the highest point totals in each region will be awarded beautiful certificates for First, Second and Third Places and be recognized at the District Conference on October 24.

Donations of time, money or food must be made to legitimate charitable organizations and activities, preferably, but not necessarily, those involved with Feeding Missouri (www.feedingmissouri.org), which is a coalition of the six Missouri Food Banks. Five of these six Food Banks have pantries or other entities which will need help or donations. Here are links to the appropriate Food Bank websites:

Please see the map below for a schematic of the counties covered in each Food Bank’s area of Service.