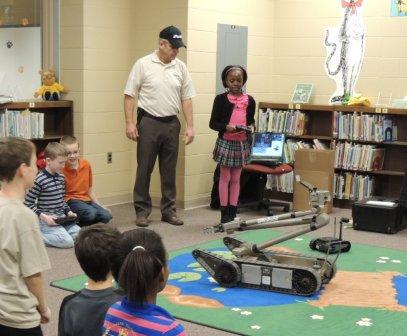 The Rotary Club of Pulaski County helps sponsor a science fair each year.  This story was written by Maj. Chris Wenner from Fort Leonard Wood about one of the pre-science fair activities designed to spark enthusiasm for the upcoming science fair.

A Partridge Elementary student demonstrates her ability to maneuver a robot.

As the students walked into the library they were each given a ticket to win one of four robots, hats and the chance to operate the robots. Principal George Lauritsen; the Librarian, Mrs. Wade; three fifth grade teachers, Mr. Benner, Mrs. Kenney and Mrs. Thomas, and several volunteers were also on hand to see the iRobots in action.

Archambault first demonstrated the iRobot FirstLook, aptly called the “Throwbot.” The 5½ pound robot can be tossed into buildings and tunnels, thrown through windows, and dropped from as high as 16 feet onto a concrete or rocky surface, land on any side and still move out.  A gameboy like controller guided the “Throwbot” toward the students and then took pictures of the students from one of the four cameras on board the 10-inch long, highly mobile and versatile robot.

“What happens if it lands upside down?” one fifth grade boy asked.  A quick demonstration had the students all eyes and ears, as one of the flippers quickly righted the upside-down robot and it was driving toward them again.

“How fast can it go and can it drive through water?” were the next questions asked. “The top speed is about 4 miles per hour and, yes, it can go through 6 inches of water,” Archambault explained.

As the FirstLook or “Throwbot” was crawling around the floor, the larger iRobot PackBot was preparing to come out and awe the fifth graders.  This amazing robot weighs just 30 pounds, has an on-board computer, GPS, five cameras, can be used in any type of weather, can climb stairs and is completely remote controlled.  The extension arm can reach out over six feet and with the gripper can pick up and carry objects weighing 30 pounds.  The Packbot is about three feet long and has a top speed of nearly 12 miles per hour.

“Can it see in the dark?”  The PackBot has an infrared capability and yes, it can see it the dark.

Who has number 5760214?  An excited girl smiled and was given the chance to maneuver the PackBot back and forth.  A few more numbers were called and more kids were allowed to see how easy the two robots were to operate.

The students were asked what would a device like this be used for and who would use it?  Everyone raised their hands to try and win one of the prizes and answer the question. One student answered, “The Police,” another with “the Army,” and others said, “hospitals and schools.”

All of the students in this Waynesville school have a tie to the military, and when asked if they would rather have a robot find a bomb or an IED versus their dad, every hand again went up and the answers were unanimous.  “Use the robots!”

Why bring robots into a fifth grade class?  Showing the robots and the simplicity of the controls raised the level of excitement and easily allowed the students to gain an appreciation of science, technology, engineering and mathematics (STEM) areas that will keep the U.S. competitive with the world.

Finally, the moment all the kids were waiting for… the drawing for the robots.  Whose ticket ends in four… six… seven… nine?  Four groups of kids were now excited to take home a robot and one student from each small group was given a miniature iRobot.

The final demonstration was provided by a student, who picked up a book on robotics donated by iRobot with the PackBot’s gripper, maneuvered it over to the bookcase and gently placed it on the shelf alongside the other books.

This demonstration was presented in anticipation of the annual science fair at Partridge, being organized by Benner, who wanted to share what science can do in a realistic manner and also stimulate thought and discussion for the science fair.  The students have completed classes that teach the scientific method and are preparing the proposals for their exhibits. Individual Waynesville R-VI schools will hold science fairs Jan. 31-Feb. 15 with a district competition on Feb. 21.

The Science Fair is sponsored by Missouri S&T, the Rotary Club of Pulaski Countyand The Fort Leonard Wood Chapter of the Society of American Military Engineers.