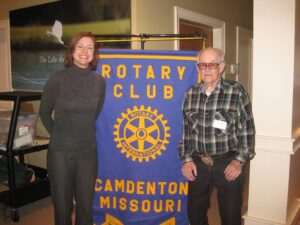 If you were to walk into the Camdenton McDonald’s on any given day between 7:30 and 9 a.m., chances are you will see a group of locals sitting at a round table laughing, sharing stories and relishing on the latest gossip. The obvious leader of the pack is no other than 93-year-old Grant Richards. Stories are Richards’ specialty. If you want to know how this came to be or why something is the way it is, chances are Richards will know the answer. And at 93, he still remembers it all.

Richards’ life revolves around his family, the family newspaper and Rotary. His father, G. T. Richards, began the Camdenton Rotary Club with a friend in 1937. Richards joined Rotary in 1945 when he returned to the area after serving in the Navy. Nearly 68 years later he is still an active member and has yet to miss a meeting. If he has to be out of town for any reason, he is sure to make it up by attending a meeting at another area Rotary Club.

“My dad had perfect attendance till he died. That was 43 years,” recalled Richards. “I used to always tell him, ‘I can beat your record ‘cause I’m younger.’ It became a habit,” he said. And beat the record he did.

The Richards family moved to Camdenton, Missouri in 1937 by way of Michigan. They founded the Reveille newspaper, now known as the Lake Sun. Richards joined the U.S. Navy and was away for a few years before returning to the Camdenton area to join the family business. In the meantime, he married his sweetheart, Francis Marie, whom he met at a high school baseball game.

“I thought she was so pretty. I just had to go out with her,” he recalled.

He married her when he first joined “the service” as he calls it. He remembers being engaged and needing to get home for the wedding. He had yet to be sworn in and said they were not going to let him off.

“I told them either they were going to give me time off or I was going anyway,” Richards said. Needless to say, he got his ten days of vacation and was able to marry his Francis Marie like he had planned.

Richards’ wife died in 2000, leaving behind her husband and two grown children. Their son, Ted, is a teacher in the Dallas, Texas area and has two children of his own. Their daughter, Susan, lives in Kansas City.

Richards has advice for younger generations: “Live good. Have fun,” he says simply. His upbeat and young attitude makes it clear that this walking history buff has “lived good” and still knows how to “have fun.”